There is nothing that annoys a seasoned snowboarder more than a newbie who doesn’t understand proper snowboarding etiquette.

If you hit the slopes without knowing the unwritten rules of snowboarding, you are going to face some backlash from people around you.

Don’t worry though, snowboarding etiquette is super easy to learn and remember and by the time this article is done you’ll be ready to hit the slopes without angering anyone around you.

Let’s get into it.

The Rules of Snowboarding

When snowboarding, it’s important that you are aware of your skill level and stick to runs that are best suited for you.

If you are a novice who should be practicing on green runs, avoiding more advanced blue and black runs is recommended.

People who have been snowboarding for years that have earned the right to take on black runs don’t want their day slowed down by a novice who is tripping and falling over themselves all the way down the slopes because they took on a run which is way above their skill level.

Hitting a run that is above your skill level is not only dangerous to you, but other boarders around you.

Just like driving, right of way is a thing in snowboarding.

People that are down hill always have the right of way. So, if you are speeding down the slopes, it is entirely your responsibility to avoid hitting people ahead of you.

Keep in mind, some people don’t respect this unwritten rule, so it is always recommended that you look over your shoulder before changing directions.

It’s a lot like driving, a good way to keep yourself safe is by assuming people don’t know how to drive and adjusting your drive accordingly to compensate for that.

In terrain parks, there is nothing worse than the person who blows by everyone else who had been patiently awaiting their turn.

Not respecting other snowboarders time by blowing by them in line is a sure fire way to earn yourself some dirty looks.

If you’re confident in your abilities to go speeding down the slopes at a high rate of speed, that is great, but you need to keep in mind it’s your responsibility to yield to slower people in front of you.

Always make sure to yell to the person you are about to pass which side you plan to pass them on to avoid confusion and potential collisions.

There is nothing wrong if you aren’t a straight line snowboarder, personally I enjoy performing wide carving turns on my way down the slopes.

As the downhill rider, you technically do have the right of way, but someone who is speeding down the hill wouldn’t be expecting or looking out for your wide carving turns.

When performing wide carving turns, it’s important that you look uphill beforehand to avoid cutting anyone off. If the slopes are crowded that day, you are better off avoiding wide turns altogether.

When I was first learning to snowboard, a snowboarder in front of me carved right into my line without looking or any warning and took me out and ended my season. Have consideration for others around you.

What should you not do while snowboarding?

Listen to music through earbuds

Listen, I get it, nothing beats carving fresh powder while listening to your favorite tunes.

However, listening to music through earbuds while snowboarding can be extremely dangerous, not only to yourself, but the people around you as well. If you are blasting music through your earbuds down the run, you won’t be able to hear anyone around you.

With your ears plugged and unable to hear your surroundings, you won’t be able to hear snowboarders and skiers uphill from you that are looking to pass you by. This can lead to you being hit from behind unexpectedly, which is a very easy way to injure yourself and the other person.

Flee the scene of a collision

Collisions happen all the time, sometimes they are unavoidable and others there is someone at fault.

Regardless of the situation, it is important that you stay at the scene of the collision until ski patrol arrives and takes down your information.

Only if you are going to get help for the injured party is it acceptable to leave the scene, even then you will need to return until the authorities have recorded your information.

Stop in the middle of a run

It’s okay to be tired and need to take a break before you get to the bottom of the slope.

But, you need to be out of the way and off to the side when doing so. Stopping in the middle of a run is extremely dangerous for you and everyone around.

Be rude to others

This one is important. Everyone on the mountain is just looking to have a good time, and it’s important you don’t ruin someone’s good time by being rude to them.

I get it can often be frustrating when newbies get in your way, but you need to remember that you were that newbie at one point in time just trying to get the hang of things.

If someone who is new to snowboarding has a bad experience with others being rude to them, they may never try again, and that’s not cool.

It’s not hard to be a kind person, words of encouragement can go a long way.

This one should be a no-brainer, but if you hit the slopes as often as I do, you notice that it happens almost daily.

Snowboarding isn’t just an adult activity, there are kids around, and the last thing they need to be hearing is your foul language.

It’s not hard to keep swear words out of your vocabulary for a day, and it’s the respectful thing to do.

So hopefully by now you have a better understanding of the do’s and don’ts of snowboarding.

It’s super important to be aware of your surroundings and be mindful of others, the mountain doesn’t belong to you and a little consideration can go a long way.

At the end of the day, people just want to have a good time shredding, and you can help them achieve that by following all of the written and unwritten rules that we talked about in this article.

Now get out there and hit the slopes! 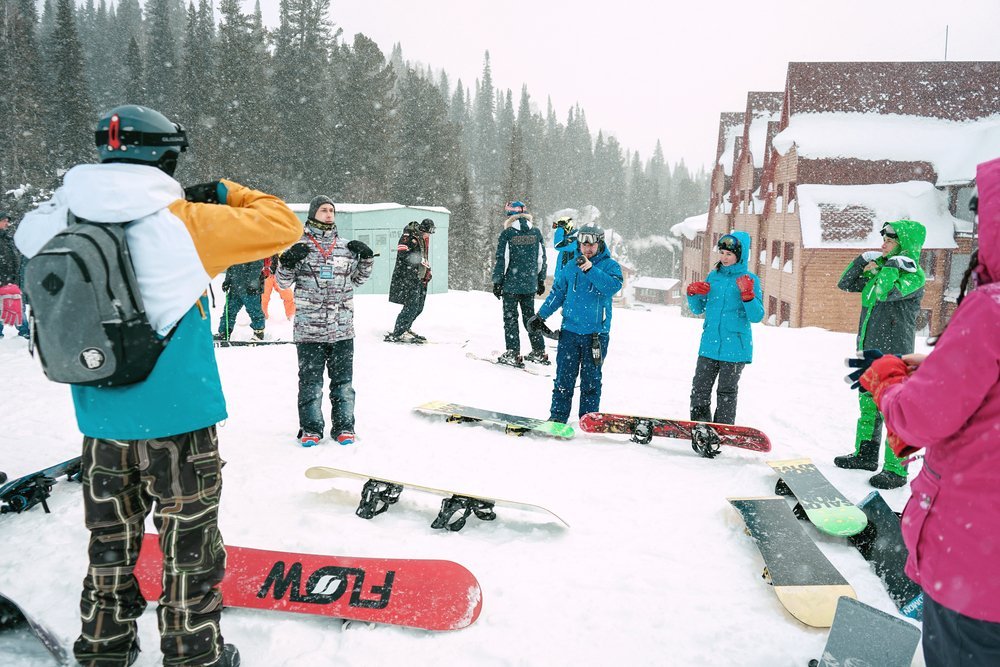